Chris Proctor show a hit, listen to the audio stream 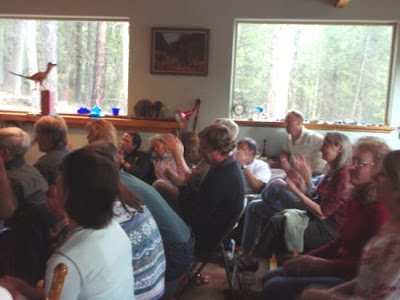 photo: Jay Toups
Fingerstyle guitar virtuoso Chris Proctor played to a full house and the crowd was way into it. People were craning their necks and standing up to see how he was creating all those beautiful sounds as Chris performed two sets of his original compositions and arrangements of traditional tunes, even a cover of "Nights in White Satin," switching between 6 and 12 strings and using advanced guitar techniques such as false harmonics, fingerpicking while using an E-Bow and bottleneck slide. As always, great music from a true superstar of fingerstyle guitar. 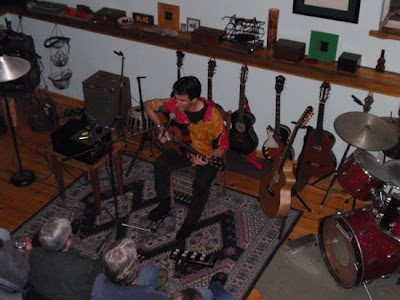 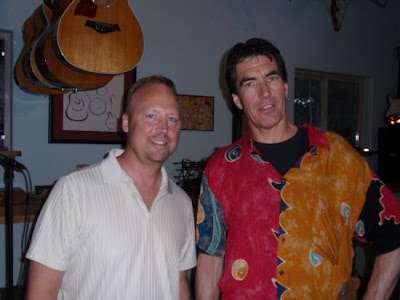 Wisconsin resident Mark Porter delayed his trip home by a week to come see Chris, even bringing his parents along. They enjoyed it too. Turns out that Mark's a fingerstyle player as well, and I look forward to hearing some of his stuff too.
I've seen Chris many times over the 28 years I've known him. He never fails to amaze and delight the audience, and this show was especially sweet in our own little Folk Taj Mahal. Inspired by the room and the big crowd, Chris gave a stellar performance and won a lot of new fans.

Please feel free to leave a comment about this show.

A very high caliber and engaging show! A real treat to see Chris's lifetime dedication to music singing through his guitars. Just awesome! Thanks, Brad

I was mesmorized by Chris's versatility on the guitar. It was a delightful concert. The setting, the food, and the nice people all wrapped around such a talented muscian made for a perfect evening. Thank you, Jay. Barbara

Mr. Proctor plays with a beautiful tone, intent on his music-making, but often with a gentle smile. His concert was very nice, with a terrific variety of pieces spanning his composing career -- from blues to Celtic to modern and Bach! Nothing like a guitar concert where we hear both the Ladybug Stomp and the beginning of Bach's Brandenburg Concerto #6! Jay's space is great and the opening potluck is always an exercise in how-in-the-heck to stop. A good way to meet folks too.

We drove a total of over 150 miles round trip for this evening of guitar -- and it was worth it!

The show was wonderful, the food was very good and the people were great. A trip worth making, to a beautiful setting to listen to the ultimate in music. Thank you, Jay. and a special thanks to Chris Proctor.